We are finally in Gibraltar! We are between Spain and Morocco, Europe and Africa, the Mediterranean and the Atlantic. We had quite an amazing night. We are still fighting with Leyton up ahead, which gives us the advantage of always being in a good position, and we are now in second place, not far behind. We are at the halfway point and, according to the latest route, we should be there on Sunday

Three days into racing on the offshore race the Final Rush, five of the six Ocean Fifty trimarans have passed through the Straits of Gibraltar within just 75 minutes of each other. Leyton leads the fleet into the Atlantic to start the final 900-mile stretch to Brest where the Pro Sailing Tour 2021 champion will be decided.

First of all it started on Sunday the bad weather decided to postpone to Monday. Skippers left to the sea. The Ocean Fifty fleet has completed the Mediterranean leg of the Final Rush and is sailing the first miles of the Atlantic, headed for the French port of Brest. The seafaring trimarans, which set off from the French port of Toulon on Monday, have regrouped due to wind speeds dropping in the Straits of Gibraltar, and are now beginning to leave the lighter conditions behind for a northerly course.

At 9:22 this morning, after just three days of racing, the skipper of Leyton, Sam Goodchild, was the first to leave the Mediterranean. Thibaut Vauchel-Camus' Solidaires en Peloton - ARSEP did the same just 34 minutes later. Within 75 minutes, the first five Ocean Fifty yachts had crossed into the Atlantic. At the time of writing, there was only ten miles between the lead and The Arch with Armel Tripon and Benoit Marie, placed fifth on the leaderboard. That leaves Erwan Le Roux's Ciela Village trailing behind them, dealing with the consequences of their earlier gamble to sail west at the start of the race, giving the leaders an advantage of 80 miles.

The Atlantic stretch of the Final Rush has begun and 900 miles still remain between the Ocean Fifty yachts and Brest. The battle for the title continues.

The Final Rush can be followed live online - VIEW

The last night in the Med was not easy on the nerves. From the start we were hoping it wouldn't be, but the whole fleet has regrouped in the Alboran Sea and we saw our friends on Arkema 4. At one point, we were in fourth place. Fortunately, everything calmed down. We found the wind again on the approach to Gibraltar and we were able to make up ground and get up to the front. 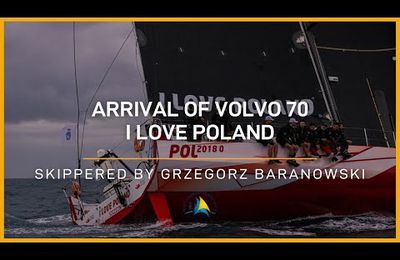